Calm has entered my life. Not that my life is completely calm but, sometime in the last few days, a tightly-stretched band of anxiety let go. Thinking of it as I write this, I breathe a sigh of relief. While I don’t think I’ll ever know exactly what happened, I want to sketch some of the contributing circumstances. You will recognize a continuity with what has gone before.

Afraid to “submit” / Relaxing into a Benign, Supportive Universe
An important part of my softening came reading a comment from my old Movement for a New Society friend, David Finke. We had been out of touch and David was excited to rediscover me through this website. David, you wrote: …

But even beyond that, my testimony to you… is that it is not WE who do the finding. Rather, we ARE FOUND – by the Good Shepherd who has never let us wander fatally off the cliff. That, I think, is the heart of Luther’s discovery that “By Grace are we saved, through faith… not by works, lest any man should boast.” The initiative is from The Divine, our cosmic Lover.

David, you go on to say…

Anglican bishop Leslie Newbiggin. … said, more or less, aphoristically:
“Religion is about man seeking God. The Gospel is about God reaching out to mankind.”

“That made my mind do one of those 180-degree flips, and largely put behind me all the demands, the rigor, the anxiety, about whether we were “doing it right” – either in terms of behavior or belief. From that point on, I’ve been open to – and largely experiencing – the marvel and miracle and Grace of God reaching and finding me, affirming and restoring me (through all my many failures and weaknesses) to that Imageo Dei of which you eloquently speak. I continue to be amazed by this Bounty …

You say you and I have

…been confined by that phrase … “that of God in everyone” [as] a statement about ourselves, rather than about God’s transformative Power…
…the most frequent Foxian testimony was, “The Power of the Lord was over all.” Looking to the Source, not to our navels.

David, all this had a very good effect on me. You continued

…both George and Helene are saying that we’re going a mistaken direction in looking at ourselves (including our consuming pathologies) rather than to the Light which both reveals our “transgressions, confusion and distractions” AND empowers us to gain victory over them – a first step on the way to Peace.

You directed my attention to George Fox’s “Letter to Lady Claypool” in which I found the phrases:

… what the light doth make manifest and discover, temptations, confusions, distractions, distempers; do not look at the temptations, confusions, corruptions, but at the light that discovers them, that makes them manifest; and with the same light you will feel over them, to receive power to stand against them. … the same light that lets you see sin and transgression will let you see the covenant of God, which blots out your sin and transgression, which gives victory and dominion over it, and brings into covenant with God. For looking down at sin, and corruption, and distraction, you are swallowed up in it; but looking at the light that discovers them, you will see over them.

These words were balm to my soul.

Fear of the “Christ” word
My book group has been reading (retired Episcopal bishop) John Selby Spong’s new book, JESUS FOR THE NON RELIGIOUS. As he has in earlier books, Spong writes out of the historical understanding of Jesus developed by the Jesus Seminar, but where many Jesus Seminar members are content to say, “this is what we know, historically,” Spong looks at most of the biblical renderings of Jesus’ life and says, “As history they are WRONG, WRONG, WRONG!”
I was shocked by Spong’s negativity as I read, but I now recognize these demystifications were important for me to hear. Spong does not negate the bible stories themselves. He says Jesus’ followers were rightly dazzled by Jesus’ God-filled presence, and wrote the gospels with magical and theatrical and liturgical overtones as their best attempt to convey the power of the “Jesus experience.” What Spong says is “WRONG” is the understanding that these stories are history, that they “happened” in space-time.

So what does it matter whether a bible story is “history” or an inspired tale, one which struggles to represent contact with a spirit-filled (but fully human) Jesus? It matters because for centuries Christianity has been a powerful engine of social control. The Roman Emperor Constantine merged Christianity with the Roman state. Over the centuries Christianity has brought the legitimated power of the army, the police and the thought police to bear on much of Western Civilization. If you can’t, or won’t, say the formula in the proper way, you could be dead, or at least excluded beyond the pale. Not to say that Christianity has not made beautiful contributions to the human experience, but the “historical” formula of the Resurrection has been used to “prove” God was active in Christianity in ways he was NOT PRESENT elsewhere.

This thing about formulas is fascinating.
Last weekend my Meeting had a panel on “Quakers and Jesus.” The next day, in a group conversation, a friend expressed shock and fear at what she had heard. She comes from a much more traditional Christian background than I do, has endured years of formulaic worship and attempts at social control based on it. I tried to tell her that, in the context of TCFM, her reaction was “phobic.” While devout talk of Jesus may well have been linked with threatening situations in her past, when members of our meeting talk like that, it does not mean we are about to lord it over her, regarding how she should think and act. I’m not sure she benefited from my observation about “phobic,” but it was very valuable to me to be see such a vivid demonstration of the lasting power and pain of the old formulas. Our conversation group recalled there had been similar strong reactions to a children’s Christmas pageant at Meeting, a few years before.

One way I have found to use some standard phrases like “Christmas,” in a way that demonstrates I am not trying to invoke their formulaic power is to offer alternative phrasings. I’ve noticed that for years, in Quaker Community Forest publicity, when I talk about our Early Winter Harvest, I’ll refer to cutting “Xmas trees” in one sentence and “Yule decorations” the next. It takes the edge of things, for me at least. I think one interesting indication that a formula is being invoked is capitalization. I do feel I have finally opened myself to the activity of the divine within me in a new way. If I end up talking about it in terms of “Christ,” I’ll use “my christ,” lower case.

Afraid of becoming a partisan
Another aspect of the knot of fear I think has relaxed in me is the fear of being seen to take sides in a theism / non-theism struggle. I have been greatly helped by John C’s class “Taking Jesus Seriously.” John points to the world that Jesus saw, with the kingdom of heaven in plain sight, all around us, or within us. John says that this kingdom is the same world that the Buddha saw. Both Jesus and Buddha indicated that it took some doing to achieve this form of “seeing” the world, but that achieving that “sight” allows us to live fully in the world and to be at peace with it, whatever it may bring, even if that is persecution and death.
While Buddha and Jesus saw the same world, when they turned to their followers they naturally used the language of their culture to explain what they saw. Hence, says John, we get two different stories explaining the same thing. (In his course John uses Buddha’s method, as understood by vipassana meditation, to help us see the world as Jesus saw it.)

One vision of the world, two cultural expressions of it, one theistic, one non-theistic!

Whew! What a relief!

Maybe I can relax.

Spong’s message is consistent with this point of view. He devotes a significant part of his book to showing how Jesus’ followers used “Jewish” explanations. If you have had a transcending experience of humanity and you are groping for words to express it, where do you turn? Well, if you are a first-century Jew, and you are saying “it’s like… it’s like…” you naturally turn to the stories of Moses, the stories of Elijah and Elisha.

John Shelby Spong’s own upbringing was very “biblical.” In the course of his life, he says, his Christianity has been transformed, and clearly the power of Jesus in his life remains strong. My single most powerful moment last week came with the reading of Spong’s epilogue, “Christpower.” Here’s the poem expressing his core religious belief: 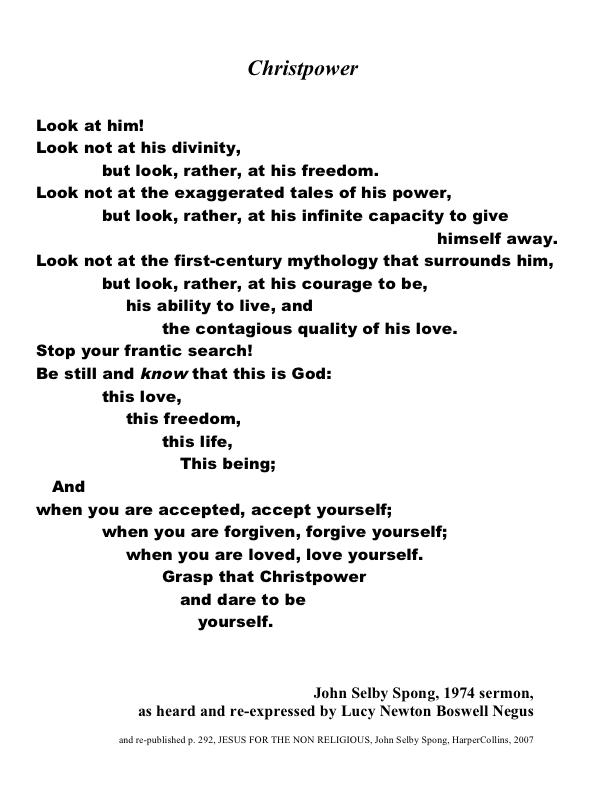 For looking down at sin, and corruption, and distraction, you are swallowed up in it;

[one aspect of Buddha’s “suffering”?]

but looking at the light that discovers them, you will see over them.

Thank you, dear friends.
Blessed be.

Quaker, living in the Twin Cities, Minnesota.
View all posts by Richard O Fuller →
This entry was posted in 'Divine Action', Guidance and tagged About Richard. Bookmark the permalink.

3 Responses to An Awakening Calm

This site uses Akismet to reduce spam. Learn how your comment data is processed.