Paul Gilding breaks our Great Disruption into three stages. The first he names The Scream, partly because of the shrill tone sounded by environmentalists and whole-planet-systems theorists, and partly in honor of Edvard Munch’s portrait,  Der Schrei der Natur (The Scream 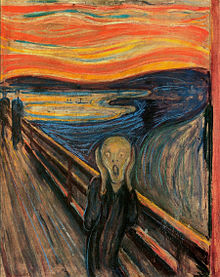 Paul places the beginning of THE SCREAM period in the late 1950s, solidified by Rachel Carson’s book, Silent Spring, in 1962. It runs through today, and will end with THE CRASH, which Paul expects to arrive shortly.

I ask myself, “Richard, don’t you think ‘The Scream’ is an apt name for this period? Haven’t you been in a state of terror?”

It’s a regular part of the human experience that in dreadful moments, like being abused as a child –but at many other times as well– we separate off a part of ourselves. We dis-associate our regular lives, where we are happy to see old acquaintances and other ordinary events, from the traumatic experience.

Yes, I was alarmed when first really got the significance of

And that alarm deepened to a state of panic on each occasion, when I

Does “The Scream” apply to me, and those I worked with? Yes.
Does it apply to my sister, who never did any of these things, but followed my life from the relatively safe vantage point of small-town mom?
Well, we’d have to say her’s was a Silent Scream.
And looking back from now, my Scream seems silent too.

“I’m in trouble.
“Maybe it’s me, with a dangerously warped sense of urgency. Maybe it’s ‘them,’ controlling my life by whatever means necessary. Maybe it’s us, dumbed by an oil addiction, or simply biologically incapable of connecting the knowledge in our frontal cortex with the action centers of our brain.”

Bad trouble, for whatever reason, or combination of them.

And a trouble so quiet that when I saw Paul Gilding label the last 50 years as “THE SCREAM,” I asked myself

Quaker, living in the Twin Cities, Minnesota.
View all posts by Richard O Fuller →
This entry was posted in About Richard, Industrial Civ., Transition. Bookmark the permalink.

This site uses Akismet to reduce spam. Learn how your comment data is processed.